Being the avid Pinterest nut that I am, I had pinned a t-shirt quilt tutorial a while back that seemed to be calling my name… but being the inexperienced (strike that, absolutely-not-experienced-at-all) sewer that I am, I was way too afraid to do anything about it. As I’ve begun the process of de-cluttering my life, I finally decided to just take the plunge and do it so I could free up some space in my awkwardly-shaped, somewhat small closet. Once I made the first cut in the first of 35 t-shirts, I came to the extremely striking realization that there wasn’t any turning back. Many hours and 35 squares later…

…there was really no turning back. This was one of the weirdest parts of the whole process for me, because suddenly all of those pieces of my past fit quite neatly in a stack on the ironing board… trimmed of all the excess scraps and unnecessary fabric, everything was a lot more compact.

Cutting was probably the easiest part of the project, and what came next was tedious and frustrating. I had to iron backing onto each one of those 35 squares –which suddenly seemed pretty freaking big again– and then pin them together into their rows. My squares sat for a while on my desk next to a big pile of apparel interfacing, pins, thread, and fleece because once again I was a bit intimidated. Eventually I started in small shifts, ironing a few rows and pinning, then rewarding myself with a few episodes of Gilmore Girls on Netflix when my hands got tired (or at least tired of being stabbed with pins). Eventually I reached the end, and my squares were piled back up by the rest of my materials… but they were piled up in pinned-together rows which were starting to look like something. 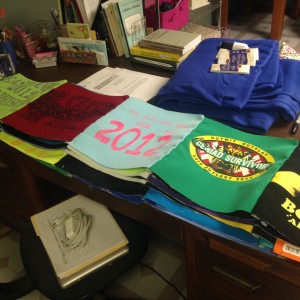 It took me about two weeks to track down a functional sewing machine to actually start the process of getting things finished. Once I did that, my Pinterest-fueled excitement kicked in and I moved pretty fast…. we’re talking nine hours straight of quilting on the first Monday of holiday break from school. Actually sewing together the rows made me feel relatively accomplished because it was my first time with a sewing machine, but after that there was –surprise– more pinning.

After I pinned the rows together and sewed them into one big piece of patchwork fabric, it was incredibly cool to suddenly lay everything out and see what was going to be the front of my quilt (cat optional).

The squares seemed extra-large again, but not in a scary, how-am-I-going-to-do-this way… in a holy-crap-I-did-this way. After that, it didn’t seem so scary to attach fleece to the back or sew on the edging– I even got a little help here and there (especially with the bias tape, which was basically ribbon).

When I tied off my last stitch and had a chance to lay out the finished product and admire my work, it was difficult to remember all those stitched-together squares as the space-hogging t-shirts they were just a few weeks before. There were shirts I’d forgotten about until I pulled them off their shelf, and it was like looking at a complete, cuddly snapshot of so many of my favorite high school moments. I had taken pieces of the past that I didn’t want to part with and sewn, finger-pricked, and ironed them into something functional and beautiful. Some of my stitches were a little uneven, but it didn’t really matter too much because it was something I made all on my own.

I’m a big fan of do-it-yourself projects because sometimes the things we think are annoying clutter are really just materials to upcycle into something awesome and beautiful. As I’ve moved through the different phases of my life, there have been parts that have necessarily and naturally fallen off to make room for the new… but some things stick around as lessons and memories, and have moved with me as I’ve gone forward.

If my life has taught me anything (so far), it’s that sometimes a little extra attention and creativity is all it takes to fit the new pieces of your life and the old together into something amazing. Sometimes, you need a little help (as Tigger can attest to) and sometimes it can hurt a little or be a little scary (as my pinpricked fingers can attest to)… but I can attest to the fact that it’s totally, completely worth it to see the final product. Sometimes, we feel like there are too many pieces to fit together or like we can’t do it, but all it takes is a bit of sewing, a bit of trimming, a bit of patience, and a bit of help to get there.

I like to pet fluffy creatures and eat food. Also I write things!