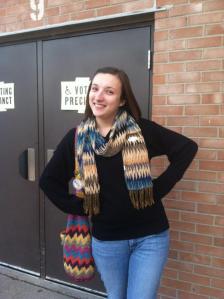 My 18th birthday present to myself was registering to vote. One thing that was cool about turning 18 in 2012 was that the first election I was able to vote in was a presidential one! I remember the volunteers at the precinct announcing it was my first time, and all the other voters pausing to clap for me. I kind of felt like a celebrity. Four years later, I will be voting in another presidential election come November. This season is shaping up to be uglier than most (politics inevitably end up ugly most of the time anyway), and I think a lot of people have completely lost faith in the political process and system.

We all know voter turnout in the United States is embarrassingly low in comparison to other developed countries — just over 50% of registered voters take the time to exercise that right. We’ve gone from a nation that went to war to fight for its voice to be heard to one that willingly silences that voice, hidden behind excuses of pessimism, frustration, and distrust.

Millennials are often criticized for being the most apathetic generation when it comes to elections, but in a way that makes sense. We’ve grown up in a political climate that never seems to stop talking about how corrupt the government is, how self-interested politicians are, and how individual voices don’t matter in an age of unlimited corporate money that can buy out elections. We are a culture saturated in media and greed, and find ourselves working harder for what feels like no reward– no wonder we’re pissed. No wonder we’re tired. No wonder so many of us are choosing to give up.

Because I’m an aggressively optimistic person (in some circles, “naive” or “unrealistic”), I’ve voted in almost every election since turning 18. I admit,  as I felt my needs and interests go increasingly unrepresented by elected officials– but wait, I vote! I am making my voice heard! Do I need a megaphone?? –I began to drink the apathy Kool-Aid. I worried that those cries of “naive” and “unrealistic” were true, and that my positive attitude was just a dwindling symptom of my youth.

But then a friend from high school started posting about this guy Bernie Sanders.

He talked about how income equality just keeps getting worse, how hard-working families like mine were clocking more hours for fewer wages, how college is something that should be accessible financially like almost every other developed nation. He spoke about empowering women, combating racial injustice, and transforming our country back into a place to work for everyone, not just the richest among us. He talked about the America I wanted so badly to believe in, and spoke to the frustrations of everyday America through compassion and unity, rather than division and hate. He talked to me.

Then I heard that “democratic socialist” label and I got a little apprehensive. Wait, don’t extreme political regimes normally deteriorate into authoritarian rule and misery? Wasn’t the Soviet Union “socialist,” and weren’t they pretty bad off? What I didn’t know at the time is that in many ways, America already has socialist policies in place, and as Hermione reminds us:

So, as a college student with a penchant for understanding words, let’s check out some definitions: 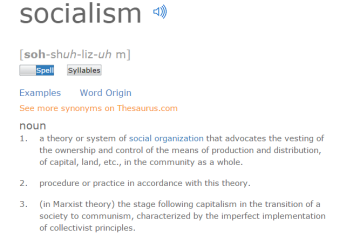 Basically, the means of production belong to the people who produce things, rather than a small, wealthy sect of society who does not represent the community as a whole. Many developed European countries marry socialist policy with democratic process, which helps prevent socialism from crossing the line into that scary authoritarian place. While there is a multitude of factors that go into determining the success of any political system in any country, most of those democracy-socialism hybrids tend to be some of the happiest on Earth.

Basically, it means popular vote enacts policies that benefit the community as a whole. The people speak, and the people benefit. Obviously, this system works best when there’s high voter turnout and high citizen engagement– when people are involved in the system and make their voice heard, the idea is that democratic socialism listens. Sound familiar? Something that helps me when examining the differences between extremist socialism and democratic socialism is this: think FDR, not Stalin. At a time when the common American was struggling and in need of a “new deal” (I know, I’m hilarious), FDR listened and reformed America’s priorities to put everyday people at the top of the list. And obviously FDR did something right, being re-elected for four terms and all.

But I digress. The point is that Bernie Sanders has inspired me to fight for a candidate who I honestly believe in– not just to settle for the lesser of two evils and pray that they mess up the country less than their competition. I believe every person should feel that inspired and hopeful when it comes to the candidate they support, and I know not every person will feel inspiration and hope about the same candidate. At the end of the day, most of us just want what’s best for our country. We just have different views on how to get there.

Partisan politics will have you believe that Democrats and Republicans are like cats and dogs (and furthermore, that they are the only two options)– that they can’t agree on anything, and if people don’t share your political views, they’re heathenish scum. Well, I’m so far left if you poke me I’d probably tip over, and Boyfriend is a little right of moderate… and neither of us is heathenish scum. It just happens that we have differing ideas on how to serve our country’s best interest, and that’s actually okay— plus it can make for interesting conversation and respectful debate! For further proof that two different things can get along, please refer to the following picture of an adorable kitten and puppy: 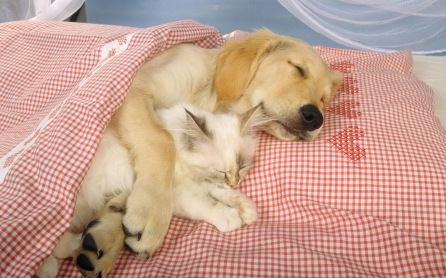 Also, many of us forget that there are more than just two variables in the equation! There are many other parties that exist if “Democrat” or “Republican” just don’t fit your views quite right. While yes, Democrats and Republicans dominate the political arena, if more of us engage with our views and reflect on how best to cast a vote on those views, that could change. For further proof that while cats and dogs are adorable, many other adorable animals exist (just like many other political parties!), refer here:

The biggest thing we lack as voters is engagement. So this election season, engage. Think about where you stand on the issues, and research the candidates and policies that best match up with those views. Vote in every election, not just the presidential one– our local legislators and representatives are just as important because the president can’t do it alone! Take the time to have (respectful) conversations, and have the patience to learn. Be open minded. Be smart. Be present. If you’re like me and you didn’t know just how many issues there are to have an opinion about, this quiz is great for sorting out your views and matching up with candidates. And best of all, it has all the  political parties!

My results (see, even I, self-proclaimed extreme leftist, can agree with Marco Rubio and John Kasich on some things!)

Politics can be exhausting. They can be disheartening. But it’s still important to engage in the political process if we have any hope of making it work for our needs. Most of us forget that it takes consistent engagement with the system to bring about change, and expect instant results (then get disheartened and give up when they don’t come about as quickly as a microwave bowl of Easy Mac). The Michigan primary is Tuesday, March 8th and I’d better see every Michigander with an “I voted” sticker. And if you’re ever thinking “I’m just one person, my voice doesn’t matter!” I present to you this year’s Massachusetts democratic primary results:

On Tuesday March 2, 2016, one more voter turned out for Bernie Sanders than Hillary Clinton in Massachusetts. One voice was the difference between victory and defeat.

I like to pet fluffy creatures and eat food. Also I write things!